In dungeon drops or Egg Machines, there's a small chance of getting an egg with a yellow plus sign. The monsters from these eggs are known as "+1 Monsters" or "+Eggs". Each +1 Monster will randomly have a +1 to one of its three stats (HP, ATK, or RCV), giving an extra bonus to that stat.

When a monster evolves, it will keep all of its + points.

When fusing monsters with +values, the coin cost greatly increases. The fusion cost will add 1000*the final +value on top of the original fusion cost (level * 100 * number of feeders).

In other words, the additional cost is
ExtraFee = (+value of the base monster + total +values of fodder) * 1000

Our base monster is a max Level Bastet with +160 already. 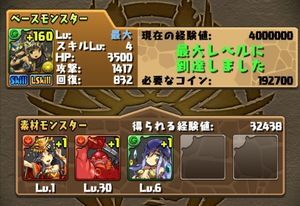 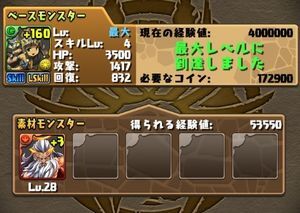 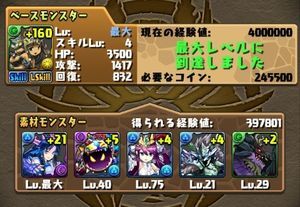 Due to the vast amount of money required to feed +eggs, a more economical method is to stock up your +eggs on minor monsters (like Bubblies or Carbuncles), then feed a larger chunk of +points at once. For instance, you can split up a stat's +99 points into 5 separate monsters with +20/+20/+20/+20/+19, then feed those 5 to the main monster.

Every PAD player has different priorities for +eggs. There are two basic strategies:

Regardless, when possible, try not to spread your +eggs too thinly, especially on monsters who are only useful for a limited period of time, like Elementals or Resist Dragons. You're better off focusing on one or two very useful monsters.

The following dungeons are reputed to have higher drop rates of +eggs than usual. Your results may vary.

Keep in mind that Evo Materials and Enhance Materials will never drop with a +, so any dungeon that frequently drops those types of monsters (such as Pengdras) will reduce your chance of getting +eggs.