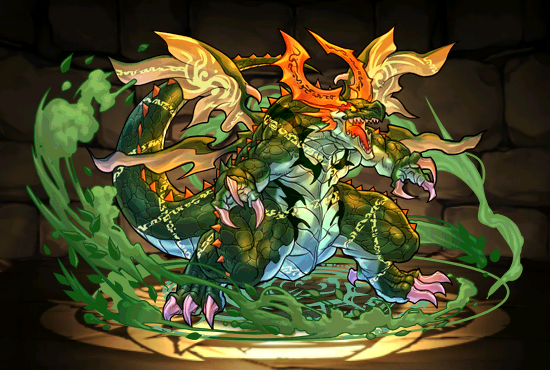 What a difference a few Awoken Skills make.

The entire "double dragon" or "late bloomer dragon" series was colloquially called the "bad dragons." Because really, even in a game with a lot of pretty bad dragons, they were awful. Even when given their rainbow-flavored ultimate evo's, they were bad leaders and bad subs. But! Fast forward to 2014 and the Bad Monster Rehabilitation Project, and all of a sudden they are excellent monocolor subs and pretty darn solid leaders for advanced players.

Skill Boost. This makes them excellent subs on any monocolor team which makes use of row awakenings.

When given their Trifruit Ultimate Evos (the series with

Flame Twin Star Ifrit), they are also very solid monocolor leaders which complement a Row Enhance playstyle perfectly. While a 3x conditional attack isn't as good (for most applications) as an unconditional 3x attack like you'd find on

Trifruit Double Dragons pair best with themselves, with unconditional 3x ATK monocolor leaders, and with Heroes such as

Martial God-Emperor, Yamato Takeru. Be sure you keep a good supply of both Row Enhancers and Orb Changers in your subs.

Throw 'em back! Reroll! They are terrible as leaders until you can beat a very hard dungeon, and not that great as subs until much later in the game when you have the right monsters to support them.

Fafnir was a hero in Norse mythology that was turned into a vicious dragon. He was later slayed by Siegfried (that's right, our blue physical heartbreaker).

Retrieved from "https://pad.fandom.com/wiki/1096/guide?oldid=106106"
Community content is available under CC-BY-SA unless otherwise noted.