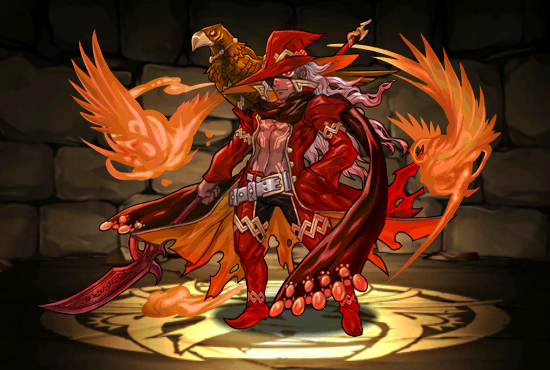 The third of the Odin series alongside

Awoken Deity Odin and arguably the most useful of the bunch by far.

His Leader skill is the same as

Awoken Deity Odin except for Fire instead of Water. A decent 2.5x bonus that can be useful in the early-to-mid-game, but generally outclassed by the Egyptian and Chinese Celestial gods, among many others.

However, it is not his Leader Skill why you would want to have him, but his great Active Skill. It deals 50x Dark damage to all enemies (an already whopping 100k damage at lvl99), as opposed to the single target attacks of the other Odins, but more importantly it poisons the enemies for 10x attack per turn, which combined with Phantom God Odin's 2000+ attack completely blows

Witch of the Night, Lilith and even

Sea Deity Neptune out of the water, making him the best Super King Dragon farmer out there.

On the flip-side his Active Skill lost the life-draining part, but the poison we got in exchange is more than adequate to make up for it.

Combine this with great stats and Awakened Skills and it makes him one truly formidable sub on any Red/God/Attacker team.

Awoken Deity Odin, he will carry you through the early dungeons with his decent Attack Multiplier, but he will also prove to be extremely useful against high-defense enemies even in the late-game. A definite keeper.

Odin (also known as Wotan) the Allfather is the head of the Norse/Germanic pantheon and father of the gods therein. Odin is a principal member of the Aesir, the major group of the Norse pantheon, and is associated with war, battle, victory and death, but also wisdom, Shamanism, magic, poetry, prophecy, and the hunt.

He is usually depicted as an old man with an eyepatch, as he gave up one of his eyes in exchange of drinking from the Well of Wisdom. His symbols are his spear Gungnir, a weapon that never misses its mark and his two ravens, Huginn (from Old Norse "thought") and Muninn (Old Norse "memory" or "mind") that fly all over the world to bring him the news about everything they see and hear.

Retrieved from "https://pad.fandom.com/wiki/1108/guide?oldid=88308"
Community content is available under CC-BY-SA unless otherwise noted.