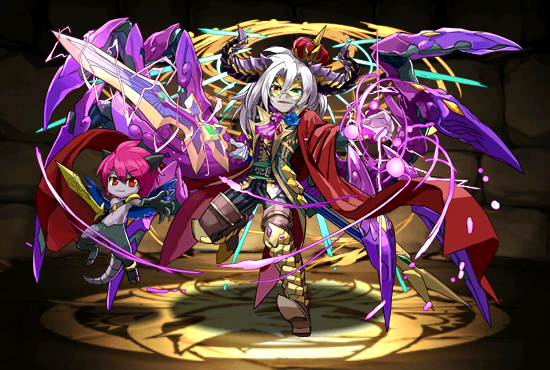 Baal's 2.5x attack multiplier is fairly pitiful in this day and age. Although it works for any and all monsters on your team, taking a hit is likely to drop him into the danger zone with little hope of recovery, not to mention it directly contradicts the purpose of his counterattack Active Skill. Like the other Archdemons, his Awoken Skills are useful for the double

Skill Boosts, so you can use him as a team filler for that at least.

Ultimate-Evolved Baal is theoretically a strong leader, but the game has yet to give him much of anything to work with. His Awakenings pretty much demand a Light Row-based team, but there are virtually no Light-type Devils, and one of the main ones,

Awoken Mephistopheles, won't even play well with him as a co-leader. Not to mention, it takes an

Angelit to even get him to this evolution, so new players can't take advantage of other popular Devil team friend leaders. Currently, the best you can do for Baal is to stick him on a team led by

The Retriever of Mjolnir, Thor or

Golden Monkey King, Sun Wukong... but nobody is building those teams.

Baal is just... not very good. If you pulled him early on, you can try using his Leader Skill to charge through the early dungeons and hopefully pull something better. Otherwise, he's not worth starting with.

Retrieved from "https://pad.fandom.com/wiki/1261/guide?oldid=137963"
Community content is available under CC-BY-SA unless otherwise noted.