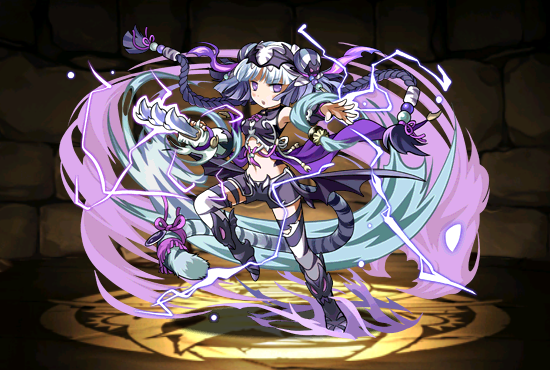 Byakko is a descend-wrecking leader (someone did challenge mode Celestial Black Dragon with her) that is not too hard to use, but you still have to pay attention. RCV is a common problem, although by using subs such as Echidna and Fallen Angel Lucifer, it will probably match up to the other Chinese Gods. Byakko is generally preferred over the other tri-color Chinese Gods due to her main type being dark, plus being devil, thus having synergy with lots of late game devils.

Tri-color Chinese gods are not always easy for a beginner, although with enough practice, two Byakko(s?) alone can probably defeat Castle of Satan. It is very easy to find subs for a Byakko team. Early members include

Keeper of Rainbow or

Enchantress of the Sea, Siren a lot, however

Jester Dragon, Drawn Joker is probably the better choice as

Enchantress of the Sea, Siren takes away all your fire orbs and Jester still covers water.

Goddess of the Bleak Night, Pandora

Haku is the Western Constellation of the White Tiger in Chinese Astronomy. The white tiger is composed of 7 stars (in Aries, Taurus and Orion), hence the name Western 7-star Formation. It is most visible during fall. Notable stars in Byakko include Electra in Taurus.

Retrieved from "https://pad.fandom.com/wiki/1269/guide?oldid=109680"
Community content is available under CC-BY-SA unless otherwise noted.