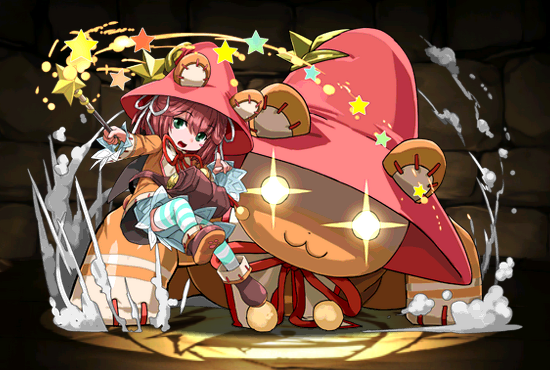 Change the World skill, and is the ticket to skill up

Yomi. She has decent HP, but low on other stats.

Awoken Zeus, allowing players not strong enough to take on Zeus Descended! a taste of an 9x steamroll team not restricted by color or type. However, she does not replace Zeus because she lacks Zeus' superior gravity. Note that two

Dub-topalits are needed to evolve into this form. It's a lot to ask for, but still manageable if you play your cards right (figuratively and literally).

If you have either Venus or Yomi, it is better to just skill them up and use them. But if not, putting Tiny on a combo team (led by eg.

etc.) or a Balanced team gives you opportunity to set up massive combos for an explosive damage burst. You may also want to evolve a Super Tiny Alma to use as a situational lead until you can get Zeus.

ECO Tiny is the boss drop from ECO Collab. Should it return, farm all that you can. You will need a strong team to farm at Heaven Sent difficulty, where she is guaranteed to drop. At lower difficulties, if you get a lucky drop, hold on to her, at least until you get

See the intro for ECO Collab.

Retrieved from "https://pad.fandom.com/wiki/1318/guide?oldid=102663"
Community content is available under CC-BY-SA unless otherwise noted.