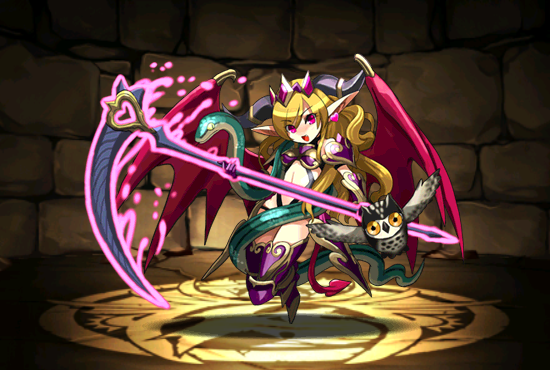 Witch of the Night, Lilith

For those without a

Neptune, Lilith is second-best as a poisoner. Her poison skill is not powerful enough to make a difference for most enemies, but since it ignores defense, it's very important for the occasional high-defense/low-HP enemy such as

Super King Metal Dragon. Having poisoners on your team also makes it much easier to farm Wednesday Dungeon and Friday Dungeon. Outside of these occasions, though, she's fairly useless.

There are a few other farmable monsters (such as

Ghostring) with a poison skill, but their stats are generally worse than an actual Lilith, so hold on to her if you happen across one.

Do not keep Lilith as your starting pull. Not only is she farmable from dungeon drops or the Pal Machine, but her skills are rarely ever helpful if you don't have other strong monsters.

Lilith is said to be Adam's first wife (before Eve), who disobeyed Adam and was cast out of Eden to become a demon.

Retrieved from "https://pad.fandom.com/wiki/205/guide?oldid=100411"
Community content is available under CC-BY-SA unless otherwise noted.