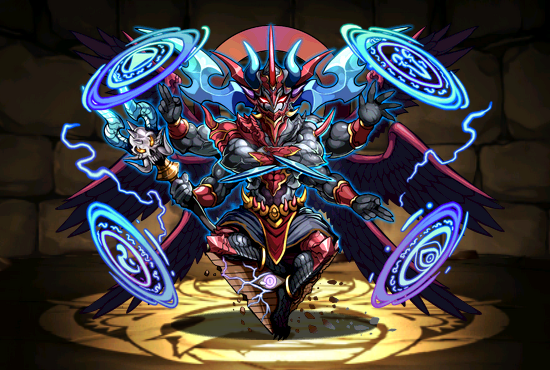 Satan, King of the Underworld

Leader Skill provides 3.5x ATK to Devil type with no conditions. Combine it with a friend's

Satan, King of the Underworld and he can form a strong 12.25x unconditional Devil team, and with 3x row enhance awakenings he forms the basis of a strong Devil team. While it is possible to team him up with other Devil leaders like

Awoken Hera-Ur, their RCV would be lost, so it is better to team him up with himself.

Archdemon Beelzebub, a combination that still retains a high ATK multiplier while also providing a ton of HP.

His Active Skill, once at a high enough level, is even stronger than

Seraph of Dawn Lucifer's Morning Star, with identical CD, with the added bonus of Satan being farmable and thus much easier to skill up. Since the strength of the attack is based off of Satan's ATK stat, having enough +eggs for ATK on him will make the attack much stronger.

Sadly Devil teams are relatively hard to build up without REM-pulls, and their cost is generally very prohibitive until mid-to-late game, so it takes a while for him to shine. Alternatively one can try to get by using demons and max-evolved ogres, which is a viable, if sub-optimal way to go.

Also, while his high multiplier means that he can easily farm most daily dungeons, he cannot tackle most Descended dungeons without having some form of HP recovery via Active Skills, something that Devil types generally lack.

Devil teams are hard to come by and he is also a Descended drop. Consider him a long-term goal.

Satan is one of the names of the Devil in Christian lore. He appeared as an angel testing the faith of humans and Jesus in the Bible, while his later incarnations painted him as the source of evil. Often syncretized with Lucifer.

Retrieved from "https://pad.fandom.com/wiki/647/guide?oldid=104744"
Community content is available under CC-BY-SA unless otherwise noted.