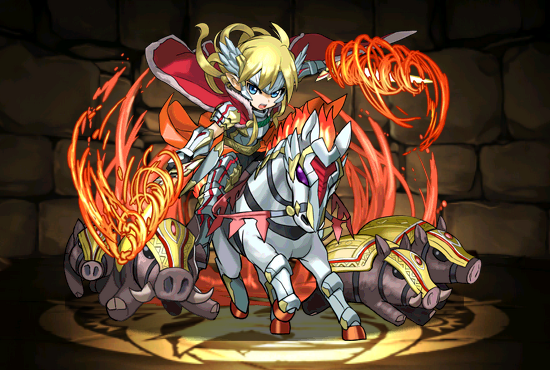 Freyr is an excellent starting pull and can lead the way for a solid mono-fire team, replacing

Firedragon Grand Tyrannos with both a better leader skill, stronger stats, and a more useful (and lower cooldown) active skill that can be skilled up through the Clash of Clans Dungeon. Make friends with

War Deity of Fury, Ares leaders for a 2/4/2 team that can take you through most of the game. As with any team,

Empress of Serpents, Echidna is a must have sub that's made even more useful with Freyr's 2x RCV. Additionally,

Titan are great farmable subs that you should try to get as early as possible and keep with you for the rest of the game.

Freyr is the god of fertility (among other nice things) in Norse mythology, brother to

Freyja. The boars by Freyr's side are a reference to Gullinbursti, his golden-skinned boar-steed, which could run faster than any horse, and ride across the sea as easily as the ground. Despite the girlish art of Freyr's lower forms, he is definitely a he. In fact, seeing as male virility is also part of his purview, contemporary viking-age depictions of him are invariably packing a very large... ahem... 'sword'.

Retrieved from "https://pad.fandom.com/wiki/652/guide?oldid=105184"
Community content is available under CC-BY-SA unless otherwise noted.