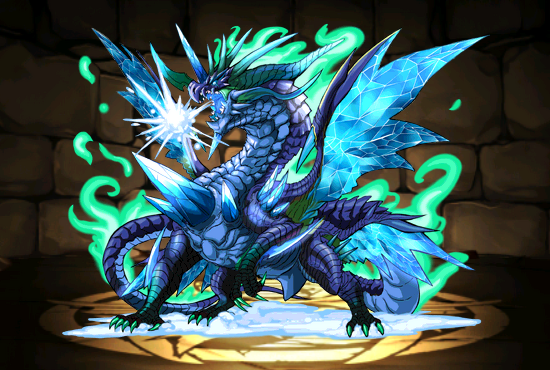 The Chaos Blizzard Dragon is a remarkably good "trophy" drop from Hera-Is Descended, particularly for Blue teams. Its Leader skill is only situationally useful - basically, whenever you might use

Ancient Dark Dragon, Caol-ila. Ancient ("Whiskey") dragons' low-cooldown Active skills are the main reason to include them in a team, but their team cost of 60 can often be prohibitive. The Chaos Blizzard Dragon's team cost of 25 makes him a very affordable alternative for mono-blue or dragon teams.

Additionally, the Chaos Blizzard Dragon has the "Devil" subtype, making him a viable team member on Devil teams.

Sure, he's nowhere near as valuable as the essential

Awoken Hera-Is, but he's a lot better than you might expect from a single-dungeon non-boss trophy monster.

You don't have one.

The artwork is a recoloring and/or photoshop of

Retrieved from "https://pad.fandom.com/wiki/661/guide?oldid=47310"
Community content is available under CC-BY-SA unless otherwise noted.