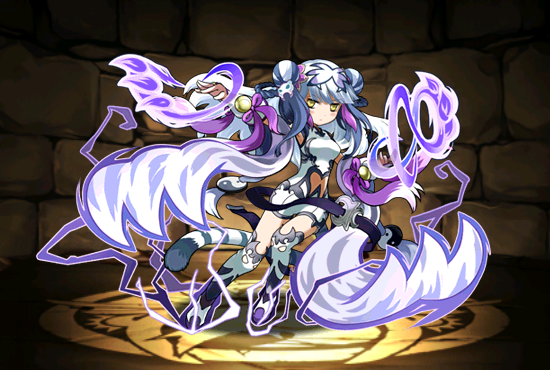 Chinese Gods have always been valued for their great stats, appearance, and potential to make a wonderful Chinese God team. Soul Guardian Byakko, Haku, is no exception. She is one of the most desired out of her sisters, because her colors (dark, fire, water) match many popular subs, such as the famous Empress of Serpents, Echidna.

Byakko's leader skill (3.5x ATK when DRK, FRE, and WTR attack at the same time) is no different than her sisters, but with different colors. She is very useful in most descends and even in regular farming. However, she is often subject to orb-trolling, a common trend in the Chinese God series. This problem can be solved by bringing in orb changers. Popular ways to combat orb-trolling include the Jester Dragon, Drawn Joker - Dark Liege, Vampire Duke combo, which can create a large burst of dark energy. Other common subs are Chaos Dragon Knight, Fenrir Knight Kamui, Hera-Is, Underlord Inferno Hades, Loki, the Finisher, and Queen of Condemnation, Persephone.

Definitely keep. Monster subs may be difficult to find at first, but Byakko will be extremely useful as you progress further into the game. Beginners can easily farm Naga as well as Vampire, which are both necessary in future Byakko teams. Most of the strongest subs are REM-exclusive, so you'll just have to wait and test your luck.

Byakko is apparently a girl who can harness dark energy and is associated with tigers. She is not only cuter than her sisters but also strong. With her, tackling dungeons will be smoother and faster (don't forget your subs!). HAKUna Matata!

Retrieved from "https://pad.fandom.com/wiki/754/guide?oldid=102696"
Community content is available under CC-BY-SA unless otherwise noted.