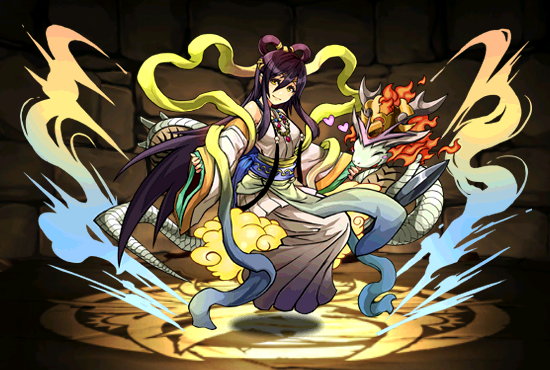 Light Izanami is a strange beast. Her stats are quite outstanding, sporting both a solid attack, plenty of health and a surprisingly decent RCV.

Her leader skill seems deceptively powerful, a 4x Attack multiplier for Balanced mons, with the catch of a 50% health reduction. This means that a dual Light Izanami team can have a whopping 16x unconditional Attack multiplier to them, which can be boosted to a staggering 48x by a

King Woodsie... for the price of having the team's HP cut to a quarter, making them a permanent glass-cannon.

Her Active Skill is also quite lackluster, a 30% damage decrease for only one turn doesn't alleviate the health issues one bit.

She also suffers from a lack of subs with good synergy. Aside of the Mystic Knights and some of the Heartbreakers she just doesn't have any good farmable subs, which is further compounded by the fact that most of the actually useful subs are also the ones who would usually form the mono-Green 1x/9x/1x

Noble Wolf King Hero, Cu Chulainn team, a party with a weaker ATK multiplier but which is much, much safer.

That said, she could easily have her uses when combined with said

It is also possible to combine her with a

At the end of the day she is a high risk, high reward leader in the vein of

Goemon, the Thief and

Champion of Olympus, Heracles, and whether or not she would prove to be truly useful is still up in the air.

She drops from a Descended dungeon, so she is really not something a new player should worry about.

In Japanese mythology, Izanami-no-Mikoto, also given as 伊弉冉尊 or 伊邪那美命, meaning "she who invites" is a goddess of both creation and death, as well as the former wife of the god Izanagi-no-Mikoto. She is also referred to as Izanami-no-kami.

The first gods Kunitokotachi and Amenominakanushi summoned two divine beings into existence, the male Izanagi and the female Izanami, and charged them with creating the first land. To help them do this, Izanagi and Izanami were given a spear decorated with jewels, named Ame-no-nuboko (heavenly spear), which can be seen on both of their PAD incarnations.

Retrieved from "https://pad.fandom.com/wiki/812/guide?oldid=88320"
Community content is available under CC-BY-SA unless otherwise noted.