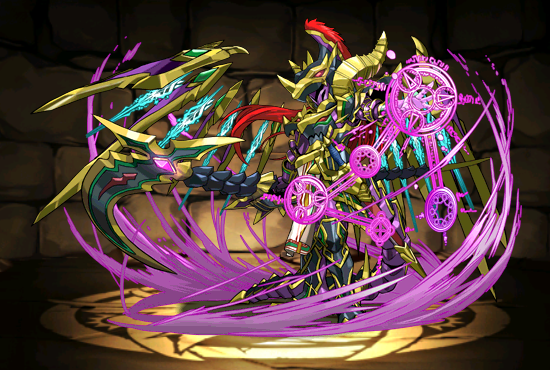 The second most popular farmable Dragon leader, and for a reason.

His stats are decent, with a good amount of HP, high ATK and a serviceable RCV, as per the course for Dragon types.

As an orb changer he is naturally part of a number of team layouts, especially on mono-Dark teams, while his Leader Skill is a solid 2x HP and ATK multiplier for Dragons.

Since dragons are generally common (though the really good ones are very cost-prohibitive and hard to get) and versatile, it makes voice a very popular farmable leader alongside

Ancient Dragon Knight, Zeal. His most common partners include himself and

Holy Thunderdragon Indra for a massive 4x/4x/1x team, the aforementioned

At the end he is a solid mon, both as a leader until the late-game and as a sub on any team in need of Dark orbs. Sadly he loses most of his usefulness as a leader by the late-game, as Dragons generally have too low RCV to keep up their HP in Descended dungeons without a good multiplier while his 2x ATK bonus is not high enough to allow sweeping.

If you pulled a CDK as a starter, you might want to keep him and see if you get something more substantial in your subsequent pulls, since getting decent subs for him is relatively easy (Starter Dragons + Ripper Dragons from the Pal machine) and he can carry you though the first handful of Normal dungeons with relative ease in order to get the stones for a second or even third pull.

If you pull one of his lower evolutions though, re-roll.

Retrieved from "https://pad.fandom.com/wiki/826/guide?oldid=92328"
Community content is available under CC-BY-SA unless otherwise noted.