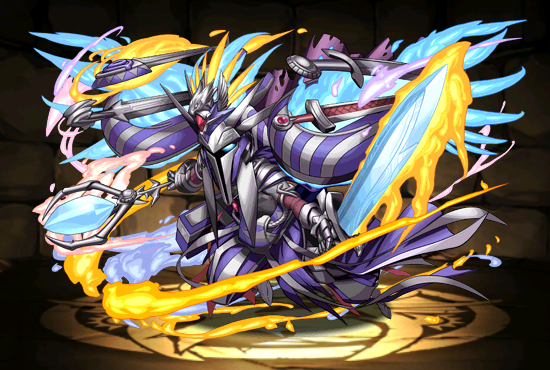 Please also see the guides for

Five-Color Ra (including here both

Dark Sun Deity, Ra) is the second most challenging of the Egyptian gods to activate (just behind the situationally useful

Anubis). He's immensely powerful, but his Leader skill can only work on around 60% of all random boards. With enough ability and luck, however, especially with a good team, he can take down every dungeon in the game for low stones, either with a second Ra (risky!), or an easier Egyptian god, like

Isis. Ra/Horus is considered safe for even most Descended dungeons, especially

Shining Goddess of Secrets, Kali (with

Destroying Goddess of Power, Kali close behind), if you're lucky enough to pull either of them. It is essential that every color is represented on Ra's team.

Except in rare cases, Ra should always be teamed up with another Egyptian god. While he can form teams with

Kirin of the Aurora, Sakuya and other Chinese gods in a pinch, by and large they either have more stringent activation conditions for little additional power, or (in the case of Kirin) don't provide the reliability that a Horus or Isis Leader would.

While it's only situationally useful, Ra's Active skill can make short work of dungeons with High-Defense/Low-HP monsters.

Ra is one of the most challenging leaders to start with, but also one of the most rewarding. If you have the patience and aptitude to stick with him (especially if you have an easier leader to help you through the tough times), there's nearly no content in the game that can stand in your way. Even if you don't feel confident with Ra yet as a new player, you may be glad to have him in your arsenal when you're ready to take on advanced dungeons in the future.

(For tips on activating Ra and other Egyptian gods, check out the Making Combos article.)

Ra was the Sun God of the ancient Egyptians. Pharaohs were considered to be incarnations of Ra, which may be why his representation in this game is made up of so many royal sarcophagus lids. Wikipedia

Retrieved from "https://pad.fandom.com/wiki/998/guide?oldid=149017"
Community content is available under CC-BY-SA unless otherwise noted.