Ancient Wood Dragon, Lagavulin, is the third in the Ancient Dragon series. The dungeon has "Adept", "Expert", "Master", and "Legend" difficulty levels, with all being Technical Dungeons. This is a Tricolor dungeon, with no Light or Dark orbs.

on 5F of Master difficulty is extremely dangerous. It can seal your team leaders, causing leader skills to lose effect. In comparison, Legend difficulty might actually be easier.

Use frequently when HP below 50% 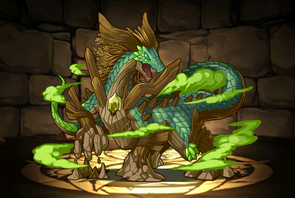 A well-balanced dragon. With maxed skill, it deals 25000 damage to all enemies in only 4 turns. The leader skill (only 2x ATK with a trigger condition) is not very useful. Overall, very powerful as a sub.

ATK
0
Due to the dragon's high defense, a low combo won't do enough damage. Orb-changers are very important, and other team members should focus on high HP & ATK. If you use two

as leader it will take around 1-2 hours. If you or a friend have

as leader, it will go faster.

Using a dual-resist team for Legend difficulty is not recommended, because

on 9F will be very hard to beat. Master could be beaten with a dual-resist or 4x HP team, but because

on 5F will bind randomly, you may die to bad luck.

If your attack is high enough, you could try using a fire team for Master difficulty.