This dungeon is officially designated as "Legend" rank with a very high difficulty. It is essentially the 40th to 49th floor of Endless Corridors migrated over.

Because this is a Normal dungeon, not a Technical dungeon, it is very straightforward and generally considered "player's first Descended dungeon" along with Hero Descended. Neptune, Hades, and Hera herself are strong, but none of them use any skills like binds, jammers, etc. There are multiple methods to beating this dungeon, but all of them need a way to crack or bypass Neptune's defense, tank or avoid Hades's nuke, and handle and defeat Hera herself.

As of October 6, 2014, which you can refer to the dungeon history down below, this dungeon has been renewed as a permanent dungeon called 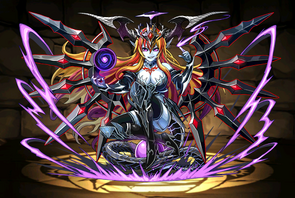 High stats all around and an excellent active skill make Hera a key member of many high-level boss teams. She is the gateway to even harder dungeons!

Goddess of the Darkness