The first installation in the Sky Dragon Biweekly Dungeon series! You can acquire

Red Skydragon, El Dorado attacks every round. Since there are no Heart Orbs, there are two strategies: either kill it quick before it kills you, or wear it down with an auto-healer.

All enemies are fire type in this dungeon, so water-type team members will make it easier to clear mobs. 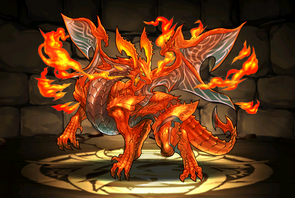 Dragon that specializes in ATK (highest in the game), but weak in other areas. Main skill is okay for clearing trash mobs, but impotent against high-defense bosses. Leader skill is not very useful due to many similar skills.
No. 399
Phoenix Resurrected 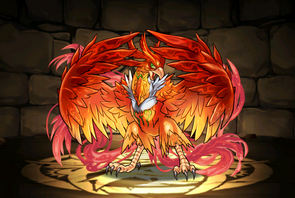 Phoenix has a special orb-enhancing skill that can further increase fire type burst damage. RCV is also unusually high among fire types, but keep in mind its HP is fairly low.

This dungeon has no Heart Orbs for recovery, so you must pay attention to health. It's best to not use too many low-HP monsters (like Devils).

Below are some sample recommended monsters. (Not including 4x ATK team setups)

Others
Community content is available under CC-BY-SA unless otherwise noted.
Advertisement