The fourth installation in the Sky Dragon Biweekly Dungeon series! You can acquire

Holy Skydragon, Shangri-La, a high-damage ATK dragon. It's stronger than

Holy Skydragon, Shangri-La attacks every two rounds. Since there are no Heart Orbs, there are two strategies: either kill it quick before it kills you, or wear it down with an auto-healer.

All enemies are light type in this dungeon, so dark-type team members will make it easier to clear mobs. 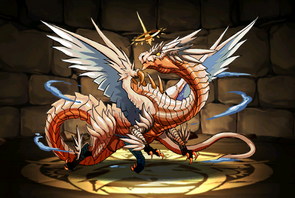 Dragon that specializes in ATK (highest in the game), but weak in other areas. Main skill is okay for clearing trash mobs, but impotent against high-defense bosses. Leader skill is not very useful due to many similar skills.
No. 405
Unicorn, the Guardian of Saints 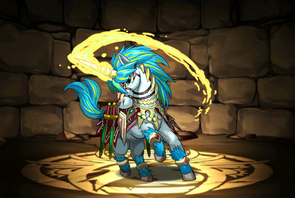 Unicorn has a special orb-enhancing skill that can further increase light type damage. The only problem is its HP is extremely low.

This dungeon's boss HP is slightly above average, but since dark teams are popular, a player with a high-level dark team could easily pass all difficulties with a 4x Dark Team +

Enchantress of the Sea, Siren! If you have no dark team or it's not high enough level, then it's still better to use a resist team for Master difficulty.

Lightning Holy Dragon can be the leader/helper, with a high-RCV monster like

Messenger of God, Archangel as the other leader. In the event you're using a 50% resist leader and a healer with enough RCV, you could get away with not bringing

Enchantress of the Sea, Siren and clear the dungeon faster with a strong attacker. If both leaders are 50% resisters, or if the auto-healer doesn't have enough RCV, you'll need to bring

Enchantress of the Sea, Siren for emergencies.

The other slots can be filled with your strongest attackers, ideally strong dark types. Those who have

Underlord Hades can use Gravity to take off a good chunk of the boss's HP - assuming you can stall enough to charge those abilities.

Ra, who should have workable boards every single round. Two Egyptian gods working together can sweep the dungeon very easily.

Goemon, the Thief, even if the team doesn't include enough

Red Giant Gigas to drop their RCV to 0. Remember, however, that heart-to-orb changers like

Gigas won't work at all unless you have some way of changing other orbs to hearts.