The third installation in the Sky Dragon Biweekly Dungeon series! You can acquire

Blue Skydragon, Nirai Kanai attacks every two rounds. Since there are no Heart Orbs, there are two strategies: either kill it quick before it kills you, or wear it down with an auto-healer.

All enemies are water type in this dungeon, so wood-type team members will make it easier to clear mobs. 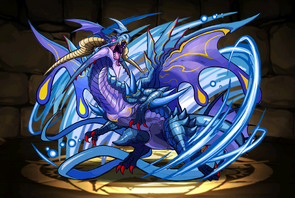 Dragon that specializes in ATK (highest in the game), but weak in other areas. Main skill is okay for clearing trash mobs, but impotent against high-defense bosses. Leader skill is not very useful due to many similar skills.
No. 401
Sea Devil Kraken 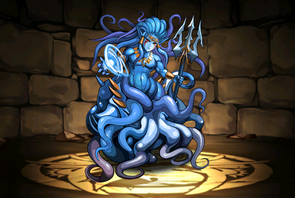 Kraken has a special orb-enhancing skill that can further increase water type damage. Although its RCV is negative, water teams often have high RCV so there's not much need for concern.

Sky Above the Blue Ocean-Master[]

Sky Above the Blue Ocean-Expert[]

Sky Above the Blue Ocean-Int[]

This dungeon's boss has fairly high HP, so Expert/Master difficulty is still pretty tough. Due to green teams being tough to build, it's recommended to beat this dungeon with a resist team.

Crystal Aurora Dragon can act as leader, with a high recovery monster like

Messenger of God, Archangel as the helper. If your 50% resist + healer provides enough recovery, you can use a strong attacker instead of

Enchantress of the Sea, Siren for a faster clear. If both leaders are damage resist, or if your healer doesn't recover enough, bring

Enchantress of the Sea, Siren for emergencies.

Other team members can be your highest damage attackers, ideally wood-types. Dark teams with

Underlord Hades can use Gravity to greatly cut the boss's HP as usual.

As long as you're careful, a resist + auto-healer team can beat Expert/Master levels with no problem. It will just take more time.