The second installation in the Sky Dragon Biweekly Dungeon series! You can acquire

Wood Skydragon, Horai, a high-damage ATK dragon. It's stronger than

Wood Skydragon, Horai has high damage and HP. Since there are no Heart Orbs, there are two strategies: either kill it quick before it kills you, or wear it down with an auto-healer.

All enemies are wood type in this dungeon, so fire-type team members will make it easier to clear mobs. 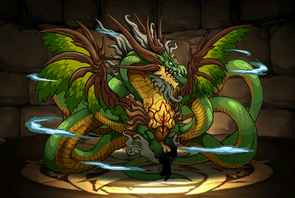 Dragon that specializes in ATK (highest in the game), but weak in other areas. Main skill is okay for clearing trash mobs, but impotent against high-defense bosses. Leader skill is not very useful due to many similar skills.
No. 403
Griffin, the Hunter of Tempests 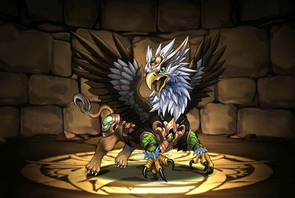 Griffin has a special orb-enhancing skill that can further increase wood type damage. The only problem is that its HP is extremely low.

The boss's attack is extremely high, likely to kill you without a resist leader. Furthermore, boss HP is very high on Master difficulty, so it's nearly impossible to sweep him in just a few rounds.

For Int and Expert difficulties, a 4x Fire Team is possible. It's not recommended to use

Phoenix Knight instead. Be sure to also bring

Empress of Serpents, Echidna, which is extremely useful in this dungeon.

Enchantress of the Sea, Siren is actually not a requirement in this team, because she will change your attacking fire orbs into hearts, so it may actually be easier to sweep with all fire-types. For Expert difficulty, if your fire team is not very strong, it will be safer to use the resist/healer setups suggested below instead.

As for Expert/Master difficulties, a Resist/Healer team is the only option. Due to the boss having so much HP, it's recommended to attack with fire types. Players with

Underlord Hades can reduce the boss's HP for an easier time. If using a fire team, be careful of Siren's ability getting in your way. If using a dark (or other color) team, then you need to consider the issue of damage output. Overall, the main thing to consider for a resist team is to increase damage as much as possible while staying alive.

Here are some sample resist teams:

Based on many trials by experienced players, you can beat Expert/Master difficulties more safely with the following teams:

Others
Retrieved from "https://pad.fandom.com/wiki/Sky_Dragon_of_Wood?oldid=33971"
Community content is available under CC-BY-SA unless otherwise noted.