勇者どんちゃんプラス is the main character of "Taiko no Tatsujin".

In the second revision of the dungeon,

どんちゃん will randomly appear. He is the base form of the new monster

メカドン in total to evolve. Please take care to save up enough.

Gameplay videos of the songs in "Taiko no Tatsujin"

It's highly recommended to turn up your music when playing!

During the collab event, download the "Taiko no Tatsujin" mobile game and clear the collab level to receive the special monster

The download for the second collab is "Taiko no Tatsujin Plus". It only has an iOS version, so only iOS players can download the App and clear the level to receive

in the dungeon to receive him. 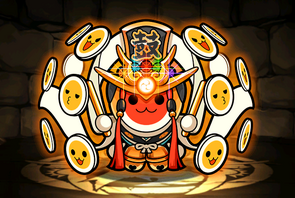 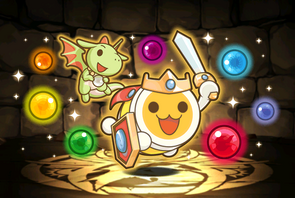 Aside from being cute, totally useless. Even though its RCV is very high, its HP and ATK are much too lacking.

Some monsters in this dungeon can be used to level up the skills of other monsters. See Monster Skills for info.

Below are sample teams that have successfully conquered this dungeon. You are welcome to share your own teams and tips here.