Surprisingly, this Tricolor dungeon may be one of the easiest Descended dungeons yet! (If, that is, you have a strong combo-based leader like

Kano, the Daughter of Nature on 2F will not hurt you until you hit her, so it's an opportunity to charge skills or arrange the board. Be careful, though, because cascades happen frequently in tricolor dungeons and it's easy to accidentally attack.

No. 810
War God of Metal, Takeminakata 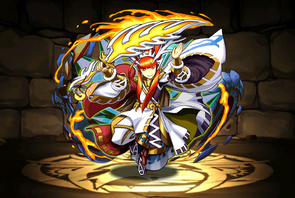 Leader Skill is a new benchmark for Physical teams. Active Skill enhances Light/Fire orbs. He is unlikely to displace

, but will see use on

teams due to his Physical typing and colors, respectively.