This dungeon has both "Legend" and "Mythical" ranks, the third dungeon configured as such. The final boss is

Ishikawa Goemon is a Robin Hood-type figure from the Sengoku era of Japan. He studied ninjitsu and robbed the rich to help the poor. After failing to assassinate Toyotomi Hideyoshi, he was sentenced to be boiled alive in oil. 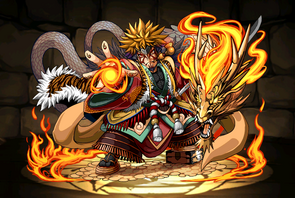 Active skill changes all orbs to Fire, providing a huge burst for Fire teams when combined with

's skills. The only downside is the long cooldown. Leader skill is even stronger than